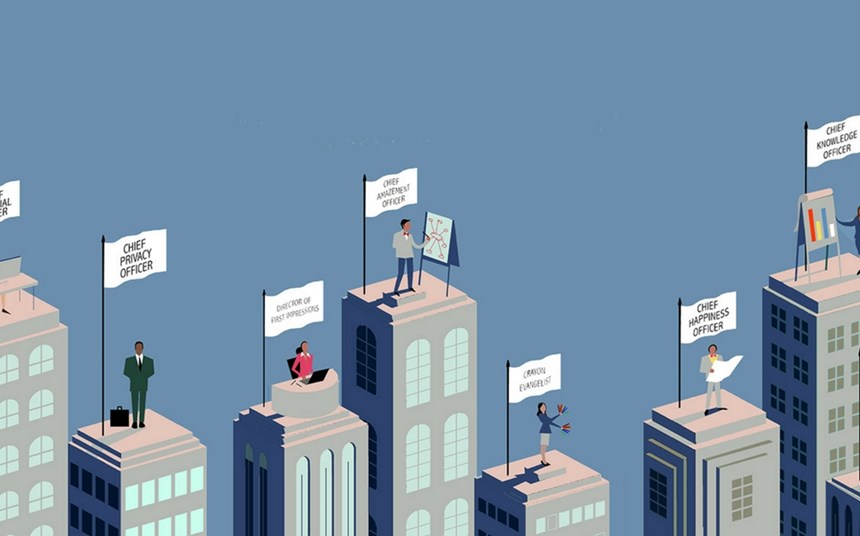 The rise of the "C" people

In a world of inflating job titles, does having a ‘ C’ title really provide the keys to the C-suite? GARY MEAD investigates

Ambassador of Buzz... Chief Amazement Officer... Crayon Evangelist... Master of Disaster – just a few of the unusual job-titles that have sprung up in the past couple of years.

Today receptionists revel in the grandiose title of ‘Director of First Impressions’ . Title-fluffing fools no-one, except perhaps the title holder; after all, the late boss of North Korea, Kim Jong-il, had 1,200 official titles including ‘Greatest Man Who Ever Lived’ . Even after he died in 2011 he gained another –‘Eternal General Secretary of the Workers’ Party of Korea’. One title he didn’ t have was ‘Chief Narcissist’.

Kodak and Dell a few years ago appointed Chief Listeners; Facebook has Chief Privacy Officers; Microsoft has a Chief People Officer; Coca-Cola has a Chief Quality and Product Integrity Officer. Steve Jobs called himself Chief Know-All, no doubt partly as a joke.

However, job title inflation has been around for some time. In the 1980s, Guy Kawasaki called himself ‘Chief Evangelist’ at Apple Computer. And as far back as 1955 Flanders and Swann, the British comedy duo, wrote a song called The Reluctant Cannibal, in which a father berates his son for not wanting to eat human flesh. The father’s title: Chief Assistant to the Assistant Chief.

There’s no simple answer as to why C-titles are proliferating now at such a rapid rate. Partly it’s a response to the lingering financial crisis from 2008. The days of easy money and ever-expanding GDP are gone – maybe forever – and it’ s cheaper and easier to grant an important-sounding title than it is to give someone a fatter package.

‘Compensation’ has morphed from money into magical thinking; those granted grander titles might feel their position is just a bit more secure than if they were just a humble ‘manager’. Partly it’s a matter of human vanity; give someone a title and they feel flattered and more significant.  And partly it’s a consequence of living in an age of flattening organisational structures: even though rigid hierarchical structures are being dissolved in the effort to make corporations fairer and more efficient, employees still want to feel important.

The corporate ladder may no longer be so steep, yet employees still think they should get a promotion, so firms feel pressured to have out ‘better’ titles to make staff feel valued.

Organisations are also increasingly using titles as a form of signalling of their own virtues. A ‘Chief Diversity Officer’ is thought to show that we really care. Perhaps the most attractive sounding title around today is ‘Chief Digital Officer’.

But are boards appointing CDOs merely to show that they are doing something about the risk of digital disruption, and what is the future fate of a CDO when everyone –not too distant a prospect – works digitally?

According to Sally Drexler, an Odgers Berndtson Partner in Los Angeles who focuses on digital in the consumer business, the proliferation of such titles is: “because of the changing nature of the roles these days, with millennials and companies going digital or disrupting industries. Companies are trying to move with the times and work out how these traditional roles are changing. According to the U.S. Department of Labor, over 65 per cent of digital roles that will exist in 2021 are not even in existence today. They have to appeal to the new type of consumer and everything has changed.”

It could, of course, be argued that dishing out bigger-sounding titles is inflationary –and just as in Weimar Germany, adding a few zeroes will end in tears. Monetary inflation, the printing of money to make it more easily accessible without relying on a strengthening economy, is socially destructive. Title inflation, the granting of inflated job titles without underlying corporate strength, no less so. Just as monetary inflation debauches currency, so does title inflation debauch language, for the sake of keeping staff happy, yet at the risk of titles effectively becoming meaningless. Far from providing people with more security, fancy titles can often make them more expendable, as The Economist put it: “Companies might hesitate before sacking an IT adviser. But what about a Chief Scrum Master? The essence of inflation, after all, is that it devalues everything that it touches.”

Yet in the end what matters, in a world of inflating job titles, is to ask yourself: am I listened to? Are my views taken seriously and acted on? The silliest of titles may turn out to be the possessor of real authority. While traditionally the Chief Executive, Chairman, Chief Financial Officer, and perhaps Chief Operating Officer have had the most clout, who knows –‘ Chief Visionary’ may turn out to be incredibly influential within the organisation, a position from which to rally all the troops. Ultimately, it’s up to you to demonstrate that you can persuade colleagues to listen to you – and that your ideas are worth taking seriously.

As climate change becomes a main focal point for many businesses, can business leaders afford to...
Read
11537