Students learning leadership at the side of CEOs 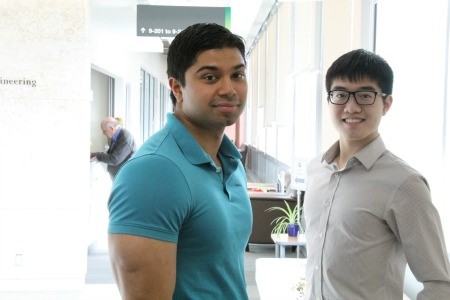 (Edmonton) A pair of engineering students have won a competition to spend a day with a CEO, receiving advice from seasoned executives and getting valuable insights into leadership.

Run by global executive search firm Odgers Berndtson, the program matched students from around the world with CEOs to help develop leadership skills.

Alam spent a day with ATB Financial CEO Dave Mowat Feb. 5 and Su will spend a day with Myron Stadnyk, president and CEO of ARC Resources Ltd. on Feb. 29.

The two rose to the top in a series of tests and interviews to win the selection.

Alam, who is in his final year of studies in the chemical engineering (co-op) program, said he learned a lot during his day with Mowat.

After meeting for breakfast and getting to know one another, the two went to a meeting with an ATB vice president and board members, who Alam describes as supportive as mentors. “There were some engineers among them, and that was something I kind of didn’t expect to see in a banking setting,” he said.

One of the highlights of the day was a talk Mowat gave at a Magnificent Men Mentoring Group gathering. The group is dedicated to improving the lives of others, focusing on young men in their mid-teens to early 20s who have faced social or family struggles.

“He talked about leadership and how to me “Magnificent Men” and it was great,” said Alam. “Some people might think that CEOs are too busy for things like this, or that they don’t care, but that isn’t the case.”

Alam says he was impressed with Mowat’s outgoing, sincere character.

“He stops and talks to everybody. At the office, he knows everyone’s name and I thought that was impressive. Yes, he is a leader but he is also personable and that is probably his most valuable trait. I think it is part of how you build a work culture where everyone enjoys their jobs.”

Alam and Mowat appear to share a habit of community service. During his first year as an engineering student, Alam established a nonprofit group called Canadian Senior Care Association that brings students and senior citizens together, with university students visiting seniors’ centres to teach yoga or music.

Aside from other community service endeavours, Alam says Mowat had recently completed a volunteering stint training a service dog.

“One thing I focused on early in life is community service,” Alam said. “With Dave, it was his whole focus all his life. He volunteers with STARS air rescue, he trained the service dog—it  shows you the kind of person he is and I’m going to try too, to impact society in a better way. Even as a student you can do a lot.”