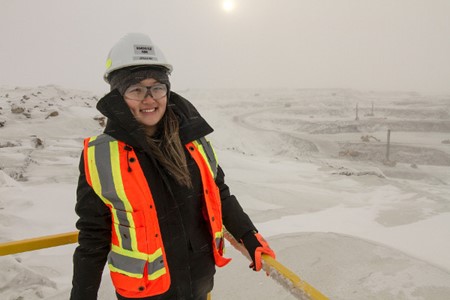 Jessica Wu, a fourth-year mechanical engineering student, spent one day in the shoes of a De Beers Canada’s CEO, rubbing shoulders with the senior leadership team, and getting a taste of what it really means to lead one of the largest diamond mining companies in the country. But the high point of her experience may have been her visit to a remote diamond mine in Canada’s sub-Arctic, where she took a peek into the world of diamond mining.

“I applied for the CEOx1Day program by Odgers Berndtson because I believe shadowing a CEO is one of the best forms of learning,” said Wu. “I wanted to know what CEOs do, why they do it and discover their career journeys.” As a program finalist, she was matched with Kim Truter, De Beers Canada chief executive officer, who served as her mentor.

“My day started early when I caught a morning flight to Calgary,” Wu said. The company’s headquarters is right next to the Calgary airport, and that’s where Wu attended a meeting with the senior leadership team, followed by a one-on-one session with her ‘counterpart,’ Truter.

“During this time, we touched on how to strategize and make a company successful, what makes a good leader, and the qualities leaders look for when they are hiring,” Wu said.

Most importantly, Wu received down-to-earth leadership advice tailored to her. “I definitely think you can learn a lot about leadership from books. But the difference between what you can find in books and what he (Truter) said was that his tips were tangible, personalized, and custom-made for me,” said Wu about her custom learning experience.

As the day progressed, Wu met with the company’s senior geologist to try out the diamond detection software, and she talked to the head HR specialist about efficient resources allocation and management. De Beers Canada has a great perspective on this. Diamond prices are soft, so to stay profitable, the company recently restructured, moving corporate headquarters from Toronto to the Calgary airport. It closed one remote mine but opened another.

Of what she learned from the company leadership, Wu said: “Always be focused on what your goals are, but don’t keep your head in the clouds. Be ready to start small.”

Sharpening soft skills and learning from Canada’s top CEO was what Wu hoped to achieve when she submitted her application for the CEOx1 Day program. Not only did she accomplish those goals, but she also got to learn about the heart and soul of the company’s business—travelling to one of its diamond mines.

“I got to visit Gahcho Kué Mine, the largest new diamond mine in the world,” said Wu. The company flew her in, as the remote site 280 kilometers northeast of Yellowknife can only be accessed by air. As soon as the plane touched down, Wu jump into the mining engineer’s suit.

The day was going pretty well until the weather closed in. It was -40 ̊C—and then it started snowing. A day trip turned into two nights in one of the crew accommodation trailers.

During her extended stay on site, Wu visited a processing plant and a diamond storage facility housing a few thousand gems. “These were raw diamonds, rock-like and dull, not the shiny diamonds you see in stores,” said Wu.

As an interim CEO of De Beers Canada, Wu wore many hats and experienced the diverse aspects of the role—even those often downplayed in leadership textbooks.

“The CEO of De Beers is always on the go. What we don’t see is all the behind-the-scenes work,” said Wu. “I’m not scared to lead, put myself out there.”

Now, the weather on the other hand…