Putting My Leadership Skills to the Test: CEOx1Day at CBC Radio-Canada 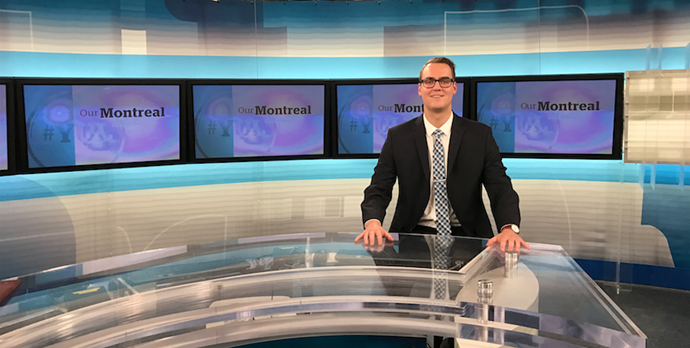 It’s that time of year again! Applications for Odgers Berndtson’s prestigious CEOx1Day competition are now open, and we’re excited to be providing you with an inside look at what your experience as a CEO for a day could be like.

If you’re a third or fourth-year Canadian university student with a passion for leadership and competition, you’re eligible to apply for this life-changing professional opportunity.

To learn more about what it’s really like to be a CEO for a day, we spoke with Mikael Clement, a 2017 CEOx1Day finalist who spent a day last February shadowing the President and CEO of CBC Radio-Canada, Hubert T. Lacroix.

Growing up in a sports-obsessed family, Mikael came by his love for competition naturally. After some sports injuries got in the way of his plans to play NCAA sports in the U.S., he returned to Montreal to attend Concordia University. “I found a lot of similarities between business and sports,” he told us. “I think I really found my passion.”

Mikael had a couple of friends at John Molson who had been selected for CEOx1Day two years prior, so he remembered hearing about their fantastic experiences. Once applications opened for last year’s program, one of them had reached out and encouraged him to apply.

“Being a competitive person, I had really seen that CEOx1Day is really kind of the crème de la crème of competitions – it was a big one for a lot of students,” Mikael said. “Having done a lot of case competitions, it was right away something I really wanted to see if I was a fit for.”

Through sports and school initiatives, Mikael had lots of opportunities to practice his leadership skills, and to him it seemed like that was a big part of what the CEOx1Day program was all about. “I thought I would test my leadership and see if I was really at that level,” he added.

What Mikael found most interesting about the recruitment process was the Hogan testing and how accurate the assessments were when it came to evaluating his strengths and weaknesses. “With that feedback, I felt that I learned so much about myself,” Mikael shared. “Whether I was a finalist or not, with the feedback from that test I was really able to see where I needed to improve, and also at the same time where I would excel.”

Going into his CEOx1Day, he knew he was in for a busy and exciting experience. After an eventful recruitment process, Mikael was ready to finally get the chance to step up and be a CEO for a day. Mikael would have the chance to sit in on CBC Radio-Canada’s annual Board of Directors meeting and speak with President and CEO Hubert T. Lacroix about his thoughts on the company as a millennial. Needless to say, he was also a bit nervous knowing there were a lot of things he had to be prepared for.

One of the major highlights of his time at CBC Radio-Canada was definitely getting to attend the company’s annual Board of Directors meeting. “After spending time studying CBC Radio-Canada’s 2020 strategic plan, it was fascinating to see how the organization tackles its current challenges,” Mikael said.

Mikael told us that one of his biggest takeaways from the day was observing how M. Lacroix led his organization by example. “He really set the tone in the whole building for being composed and being super friendly and having a positive attitude, and I kind of saw that wear off on everyone else in the organization,” Mikael noted.

Since his CEOx1Day, Mikael has graduated and spent his summer working at a small management consulting firm. After gaining some valuable experience, he’s hoping to transition to a larger firm where he can show off some of the skills he’s developed over the past few months, and of course, the exemplary leadership skills that landed him a CEOx1Day finalist spot.

“What I realized with M. Lacroix and the whole CBC organization is how important setting goals for yourself is. That’s something that I’ve actually adopted since then,” Mikael shared.

We asked Mikael if he had any advice for students who are considering applying to the program themselves – here’s what he advised: “Just take a shot. If you ever want to be a leader in any type of team or organization or whatever it may be, this is really the competition for you.”