Mentorship program gives students a view from the top 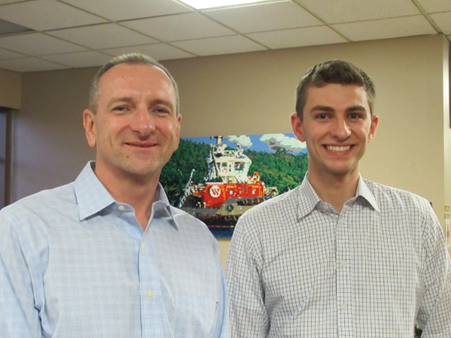 It has been the focus of his bachelor of commerce degree at the University of British Columbia’s (UBC) Sauder School of Business. He has also enhanced his education with work as a boarding agent, strategy, and operations consultant and supply chain coordinator.

With graduation looming, Piechnik put his name forward for Odgers Berndtson’s CEOx1 Day program, which gives a select group of university students the chance to shadow the leader of a prominent organization. On this year’s list of 20 participating CEOs was Jonathan Whitworth, then chief of Seaspan ULC.

“I saw Jonathan’s name, and that more than anything made me really want to apply,” said Piechnik, who was chosen from hundreds of applicants to receive a day of mentorship from the man at the helm of a group of shipbuilding and marine transportation companies.

And then Whitworth announced his retirement.

“Obviously it was a surprising piece to hear that the CEO I was shadowing was retiring. I think I might have scared him away in the first five minutes and he decided he didn’t want to be CEO anymore,” joked Piechnik.

But the story behind that surprise announcement was itself a valuable lesson to Piechnik – a lesson in clear goals and the will to achieve them.

“I had a big hairy audacious goal for myself,” said Whitworth, currently interim CEO of Seaspan Shipyards until the end of 2017. “I originally penned it in 1993, which was when I was still sailing on ships and finishing my MBA.”

“I wanted to work in an international shipping company and work my way up to be president, which I did. I wanted to become a CEO and take that company to be the most successful and innovative marine company in North America, in the 21st century.”

Whitworth, who was 26 at the time he envisioned his goal, planned to pursue his career ambitions and retire at 47 with his wife and two children. Earlier this year, he announced just that.

“Strategy and execution – it’s not just a business thing; it can be personal as well,” he said.

Over the course of a full day at Seaspan’s facilities in North Vancouver, Piechnik got a front-row seat to how strategy and execution under Whitworth’s leadership have elevated Seaspan’s standing as an industry leader.

The soon-to-be UBC graduate was a fly on the wall in senior executive meetings, had an hour-long interview with Whitworth and toured the company’s Vancouver Shipyards. He saw how hugely complex undertakings were broken down into manageable steps; he witnessed Whitworth’s respect for the company’s more than 2,800 employees.

“Jonathan probably knows the names of a large number of the tradespeople, and not only that, but probably also the name of their spouse, and maybe even their kids,” said Piechnik. “I could tell that Jonathan is a leader who really cared about people, and I think that’s the impetus for why he does business.”

Similarly, the genuine empathy Odlum Brown CEO Debra Hewson had for her colleagues impressed Abby Gnawali during the day she spent shadowing the leader of the Vancouver-based investment firm.

“The perception you [have] of somebody in a leadership position in that field is very kind of cutthroat,” said Gnawali, a fourth-year UBC commerce student majoring in accounting and minoring in developmental psychology. “It was just the exact opposite. She brought so much genuine attitude to the people around her. You could see how they responded to it.”

As part of the CEOx1Day program, Gnawali traveled with Hewson and her staff to Victoria for employee and client presentations. Not everything went smoothly.

“It was one of those days,” Hewson said. “And at first I was like, ‘Oh my God, it’s going completely off the rails,’ as these things sometimes do. But then I thought, well, this is actually good because it’s kind of what happens.”

There were travel issues, which delayed two-thirds of Hewson’s team. Gnawali herself got delayed. Presenters in Victoria had to scramble to cover for their missing colleagues in front of hundreds of clients.

“It wasn’t the professional kind of serious day that I planned, but in the end, I think it was actually a realistic day of what happens sometimes,” said Hewson, who was impressed by the self-reliance and quiet confidence her mentee demonstrated over the course of the day.

“We wanted to expose as many students as possible to what it’s like to be selected for a senior role and to eventually spend a day walking in a CEO’s shoes,” said Eric Beaudan, global head of Odgers Berndtson’s leadership practice, which has been running the CEOx1Day program in countries around the world for the past several years.

In Canada, 200 to 300 students typically apply to participate. Around two-thirds receive a leadership assessment, and semi-finalists are interviewed for summer or full-time placements with management consultants McKinsey & Co. and get access to career-oriented exercises and workshops. Only a handful are selected for the final mentorship part of the program.

“I think CEOs are naturally very curious to interact with a newer generation that, in my view, has been misunderstood or maligned as many generations are,” Beaudan said. “And the CEOs are very eager to understand what drives those students and that generation.” He added that each day, 10,000 baby boomers retire in North America and that by 2020, millennials will make up most of that shortfall.

“Leading organizations are thinking about this,” he said. “The best CEOs are people who are good listeners and who are learning. During their lifetime they never stop learning. So I think this program is meant to reinforce that.”