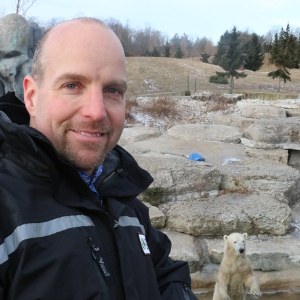 Disponible seulement en anglais - Mr. DeJong comes to the Zoo from the Vancouver Aquarium Marine Science Centre (VAMSC) where he began his career as the Vice President, Conservation and Education in June 2012. From November 2015 to May 2016 he served as the management representative at the Oceanographic Aquarium in Valencia, Spain and was then appointed Vice President and General Manager of VAMSC in June 2016. While in the GM role he was responsible for the re-accreditation of the site, the development and building of new and Walrus and Stellar Sea Lion exhibits and significant animal life support upgrades.

He was also instrumental in a number of significant accomplishments including:

In addition to his employment at the VAMSC, Mr. DeJong has previously worked at the Royal Botanical Gardens (RBG) in Hamilton as the Director of Biodiversity Programs, at Conservation Halton as a Park Area Manager, and with Ontario Parks, as an Assistant Park Superintendent at Bronte Creek, Presqu’ile and Ferris Provincial Parks. He has also worked as a Natural Heritage Education (NHE) Leader and Interpreter at Presqu’ile Provincial Park. Mr. DeJong has a Masters of Environmental Studies from Wilfred Laurier University, a Bachelor of Education from the University of Toronto and a Bachelor of Science (Honours) from Brock University.

In addition to his vast work experience, Mr. DeJong has extensive volunteer experience including roles as a director with a number of not-for-profit organizations including Alliance of Natural History Museums of Canada, Canadian Association of Science Centres and VanDusen Botanical Garden.