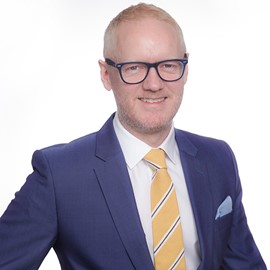 Originally from the UK, Mark has lived and worked in London, Sydney, Shanghai and Singapore over the past 20 years.

As CEO of MediaCom APAC, he is responsible for the operations across 13 markets and over 1,500 colleagues, working with many of the world’s leading marketers, including P&G, Coca Cola, Uber, Shell, Bose, Mars, Richemont and Fonterra.

After graduating from The University of Edinburgh, Mark began his career at JWT in London and after several years, transferred to MindShare Australia spending four years running the IBM and Premier Automotive Group businesses.

From Australia, he transferred to MindShare China as Head of Strategy in 2004 where he developed his cross-cultural experience, working with marketers including Diageo, Nike, Unilever, Nestle and Motorola.

Mark left MindShare for Omnicom, to launch PHD China in 2008. He guided PHD from 8 to 300 employees to become winner of Greater China Agency of the Year in 2010 & 2012 and won China’s first Cannes Media Lion. In 2012, he was named Campaign Asia’s Agency Head of the Year in Greater China.

He left PHD in 2013, returning to WPP to take up his current role with MediaCom. He lives in Singapore with his wife and three children.