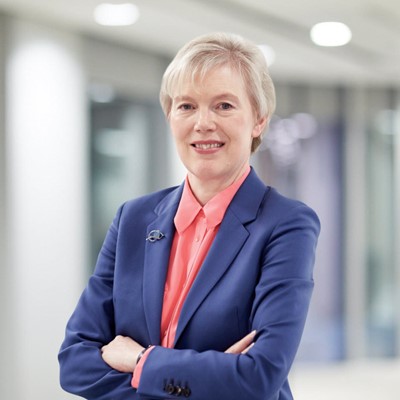 Evelyn was appointed Bupa’s Group CEO in July 2016, having been Acting Group CEO from April 2016. She is a member of the Bupa Board.

Evelyn joined Bupa as CFO in September 2012, from Friends Life where she was Chief Executive Officer of its Heritage division. Previously at Friends Provident, she was the Executive Director responsible for strategy, capital and risk and, before that, Chief Financial Officer.

Evelyn grew up on a dairy farm in Ireland and she’s the eldest of six. She was one of the first two women in Ireland to qualify as actuaries. She began her career with New Ireland Assurance and Bank of Ireland. She holds an MBA from London Business School and was previously a Non-Executive Director of the IFG Group in Ireland. Evelyn is currently a Non-Executive Director of the Bank of Ireland Group plc and a member of their Audit Committee and Nomination and Governance Committee.

On becoming Group CEO in April 2016, Evelyn established a clear Strategic Framework to focus the organisation on delivering for customers.

Evelyn believes strongly in promoting diversity in the workplace and empowering people to deliver high standards of service and care for customers.