A Chemical Engineering student has spent a day working alongside Sage Chief Executive, Stephen Kelly, as part of Odgers Berndtson's international initiative, CEO for a Day.

Christina Le, currently studying at the University of Manchester was one of a number of students selected to glimpse of life running a major company or organisation.

After her day with Stephen, we asked Christina for her thoughts on the initiative.

Why did you take part in the programme?

"I have always wanted to know what it is like being a CEO, and the CEO x1 Day programme organised by Odgers Berndtson has given me the opportunity to find out. After coming across this programme online, I felt it was a great opportunity to try something new and challenge myself in a different way. I was not expecting to be chosen so it was a very nice surprise when I received the news!" 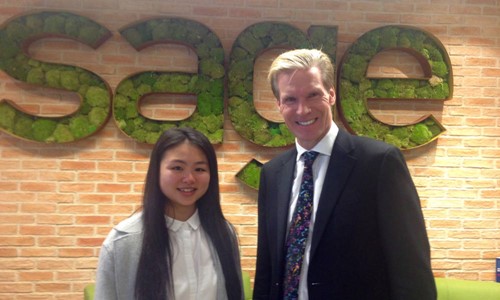 What was the day the like? Did anything surprise you?

"Initially I expected a typical day to be lonely and routine, however, I couldn’t have been more wrong. When I arrived at the office, I instantly felt a sense of community. The office was bright and open with a great view; everyone seemed genuinely happy to be there. The day consisted of various meetings and I was lucky to be present for Sage's strategy planning day. Everyone in the office got together as the executives gave a presentation. It focused on what the company had achieved in the previous year as well as future plans; giving a great sense of involvement across the company. It was a great chance to engage with the executives as well as ask them any questions directly; this ensured that everyone knew what was going on within the company."

Has it changed your plans for the future?

"After shadowing Stephen for the day, I had a greater understanding of the role of a CEO and the corporate world. The day showed me the importance of management, however, great the product you're selling is. The complexity behind each decision was evident; there are always various areas to consider. After that day, I realised that communication within a team is always essential. It was definitely an eye-opener and a career milestone to aim for in the future."

What are the biggest challenges for your generation in aspiring to be corporate careers?

"I think my generation has developed a strong sense of fear towards failure, to the point where some are too scared to step out of their comfort zone and try something new. They are more reluctant to take on positions of responsibility as they are afraid of failure, and more importantly the consequences they may face. It is important for everyone, including myself to overcome this fear of failure and just try to the best of your ability. Be confident in what you do and believe in yourself. If you don’t try, yes, you won’t fail - but you won’t succeed either."