What’s it really like to be CEO for a day?

Four Concordia students share what they learned about leadership and their experiences from the CEOx1Day program. 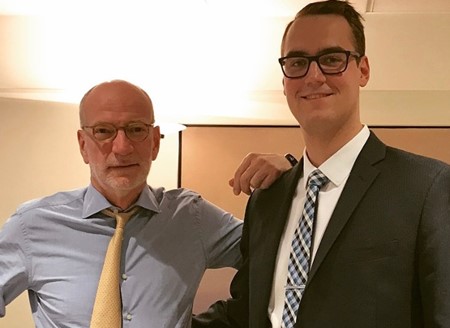 Among the hundreds of Canadian undergrads who participated in the 2017 Odgers Berndtson CEOx1Day competition, four Concordia students made the top 21.

This brings the university’s tally of finalists to nine since the event began in 2014.

‘Seek out opportunities in different sectors’

A highlight of shadowing the CEO of one of Canada’s most important corporations was attending its annual Board of Directors meeting. The event brought together all the executive vice-presidents of CBC and Radio-Canada from across the country.

This was no ordinary meeting. It unfolded on a grand stage, reminiscent of an award show. We got an insider’s view of what will grace our TVs and radios over the next year. I also saw first-hand the strategic vision and leadership of Hubert Lacroix, reflected in the departmental presentations.

Throughout the day, I met several executives, such as the heads of scripted and non-scripted English content at CBC and the director of Digital Services at Radio-Canada. Many, including Lacroix, came from diverse academic backgrounds, which showed me there are different paths to the media sector.

The other highlight was getting a private tour of the studios, including exclusive access to the Radio-Canada newsrooms during live broadcast. Plus, we visited the studios of Tout le monde en parle and ICI Musique.

I gained incredible insight into what it’s like to lead and manage a large national corporation. As I consider my career path, I’m grateful for the perspectives Lacroix provided, including the necessity to vary my personal experiences and seek out opportunities in different sectors.

I learned unforgettable lessons on leadership, management and overcoming adversity.

The day started at 7:45 a.m. with Lacroix in his office. I asked him about his background, his path to CEO and the current challenges he faces as the company’s leader. As an ambitious and success-driven student with a passion for sports and business, I couldn’t have chosen a more perfect match.

After spending time studying CBC Radio-Canada’s Strategy 2020, it was fascinating to see how the organization tackles its current challenges. The company’s use of a unique data-driven approach in attracting la génération numérique was particularly captivating.

I’ve sat on the Commerce and Administration Students’ Association Board of Directors for years. I hope to bring some of the CBC’s efficient processes back to my board work at the John Molson School of Business.

In the afternoon, I sat down with the general manager of Finance and Strategy, Benoit Villeneuve. He taught me about the organization’s short and long-term strategies, monetary and fiscal policies and the implications of recent budgetary changes. He also provided helpful guidance for my future career path.

The CBC building was full of executives who cared about my presence, opinions and career aspirations. I know this environment is a direct consequence of the company’s genuine and honest CEO.

Montréal International seeks to enhance the economic development of Greater Montreal by attracting foreign wealth and accelerating the success of the company’s partners and clients.

The day began with a meeting in Hubert Bolduc’s office, where we introduced ourselves and he offered career advice.

After that, we met with Richard Chrétien, founder and general manager of Le Sac à Dos. The organization strives for the social and economic integration of people living or at risk of living in a situation of homelessness. Bolduc aimed to solve a human capital management case while giving back to the community.

Following lunch, Bolduc and I had meetings on the economic development of Montreal. We sat down with employees from the International Organizations program and the Strategic Talent program. Montreal was recently named the best city in the world for international students and the company wants to leverage this recognition.

Montréal International is partially funded by the federal, provincial and municipal governments. With his past experience in politics, Bolduc is well-suited to his position. Toward the end the day, I participated in a meeting between him and a principal adviser to Montreal’s mayor, Denis Coderre. It was impressive to see the CEO in action!

The overall experience grew my business networks, but it also showed me the importance of caring for others and striving for excellence as a successful leader.

Being CEO for a day helped me develop the leadership skills necessary to run my own business. I met with executives from all segments of Investissement Québec: investments, financing, performance, legal, public relations, human resources and risk management.

I even got to sit down with leaders from their subsidiary, Ressource Quebec, where my prior experience in mergers and acquisitions surrounding resource-based companies came in handy.

Most unforgettable, though, was sitting down with CEO and president Pierre Gabriel Côté for two hours to pick his brain. The discussion was dominated by three primary topics: entrepreneurship, execution and people.

He spoke passionately about challenges he faced throughout his career. As a curious student, I continually pressed for more. The key takeaway from the day was that humility enables success.

I believe it won’t be long before I spread my wings in an entrepreneurial venture. At such time, Côté will be the first person I call for advice.

For any student considering this competition in the future — make sure you target a CEO whose experience and expertise align with yours.