If you start seeing IKEA's Canadian boss cropping up on LinkedIn more frequently, you can thank Maria Poonawala. In return for some valuable mentoring at the Swedish company, she was able to leverage her generation's gift for all things social media. 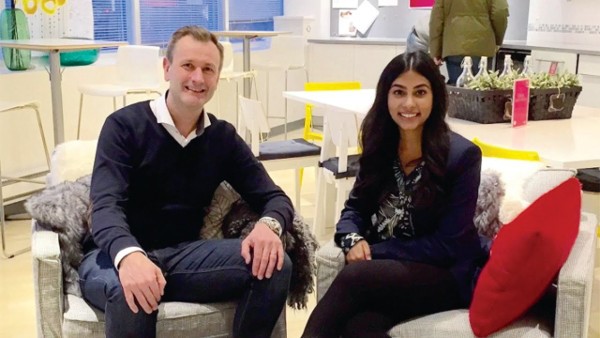 If you start seeing IKEA's Canadian boss cropping up on LinkedIn more frequently, you can thank Maria Poonawala. In return for some valuable mentoring at the Swedish company, she was able to leverage her generation's gift for all things social media.

Ms. Poonawala, a global management student at Toronto's Ryerson University, recently spent the day at IKEA Canada's headquarters in Burlington, Ont. After spending the past 3 1/2 years learning how to run a global enterprise, she felt the most valuable lessons of leadership were waiting for her outside the classroom. So when she heard about a program that would allow her to shadow the CEO of an international firm for an entire day, Ms. Poonawala applied right away.

"I was really excited about the idea of being mentored by the leader of a global company, even though it's only for a day," the fourth-year student says. "It's one thing to learn about running a company in class, and entirely another thing to see an actual CEO up close, in action."

Ms. Poonawala got the real-world lessons she was looking for. Last month, she won a spot in CEO x 1 Day, a national program in which third- and fourth-year university students shadow a CEO for a day.

Now in its third year, the program boasts a top-tier list of participating companies across a wide range of industries.

Students who are selected for the program can name the CEO they want to shadow. Ms. Poonawala chose Stefan Sjostrand, president of IKEA Canada.

"Stefan was my first choice because I really connected with his background," she says. "I'm very curious about what it's really like to run a global company and I knew that Stefan has had multiple roles running IKEA abroad as well as in other companies."

So what did Ms. Poonawala learn during her day at IKEA?

"One big takeaway was learning how important it is for a leader to live and breathe the company's vision," Ms. Poonawala says. "One of the biggest personality traits Stefan has, which is really unique, is that he has a very infectious, positive attitude, and that trickles down to the rest of the company."

Shadowing Mr. Sjostrand also gave Ms. Poonawala a glimpse into the habits of a successful leader. During her day at IKEA, Ms. Poonawala noted Mr. Sjostrand's ability to see the big picture and how the different moving parts in the organization come together to form a cohesive whole.

"He's very organized," she says. "It was amazing that he was so open to sharing his experiences with me, including how he faces challenges and how he prioritizes."

The knowledge sharing was two-way, Mr. Sjostrand says. While he was mentoring Ms. Poonawala for the day, he also gained from some reverse mentoring.

"She taught me how to update my LinkedIn profile this morning," he says. "We also shared information about things that are important to us in our daily lives, simple things like how she categorizes her inbox and how I do mine."

With plans to double its presence in Canada in the next decade – up to 24 stores from its current 12 locations – IKEA needs to recruit about 10,000 people in the coming years, Mr. Sjostrand says. That's why it's important for the company to enhance its brand as a top employer and make sure people know IKEA is a great place to work.

Connecting today with the next generation of workers is a key step in the company's growth strategy, Mr. Sjostrand says.

"So we have different job fairs to try to recruit and attract people, and we try to connect with different universities," he says.

At IKEA, it's not unusual for young employees to be given significant responsibilities – part of the company's culture, which focuses on talent versus age, Mr. Sjostrand says. IKEA runs several talent-development programs, including a leadership program that recruits people with little or no work experience but plenty of potential. "We trust people a lot," Mr. Sjostrand says. "That's something that's made our culture very strong."

While this was Mr. Sjostrand's first experience with CEO x 1 Day, he isn't new to mentoring. He has taken a number of employees under his wing, including one who lives in Sweden.

Like all good teachers, he also continues to learn. "I have two mentors myself," Mr. Sjostrand says. "I think it's important to continue learning from other people, so that you don't stop developing as a person and as a leader."

The CEO X 1 Day program matches third- and fourth-year university students with some of Canada's top CEOs. Executive search firm Odgers Berndtson has been running it globally for 10 years, and The Globe and Mail is a program partner.