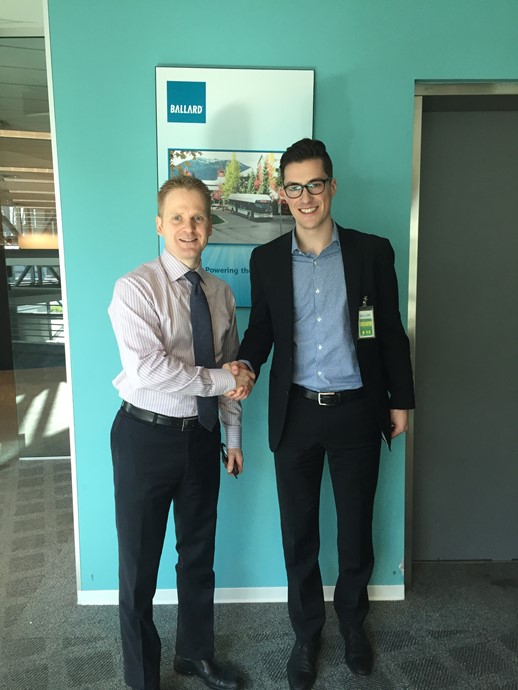 This International Business student at the University of Victoria came across the opportunity of a lifetime almost by accident — but counts himself immensely lucky that he did.

Austin Buzzell, now a fourth-year student studying abroad in Singapore, was chosen as one of the 2016 finalists of Odgers Berndtson’s CEOx1Day program. He was awarded the opportunity to spend the day at Ballard Power Systems, a Canadian Fuel Cell Technology company, where he shadowed CEO Randy MacEwen.

Austin says Odgers Berndtson’s CEOx1Day program provided him with an eye-opening and rewarding experience that could not be matched.

“I definitely developed a newfound respect for a CEO of a publically traded company — and the management team,” he says. “Being able to sit behind the scenes allowed me to see just how time-intensive a CEO’s position is.”

As a Calgary native that moved to Penticton, B.C. in pursuit of an NHL career, Austin’s fate was nearly a much different story — it was a last-minute change of heart that put him on the path to a Business career in the first place. After half-heartedly accepting a hockey scholarship for a school in Michigan, he debated his choice right up until he received an admission offer from the University of Victoria just three weeks before he was due to start school. Upon discussing the matter with his parents, the choice was clear, and he chose to forego his scholarship and began his Business education in B.C.

“I always knew that Business was a passion in my life [but] I was stuck with the dream of being a hockey star,” Austin explains, adding that he believes his decision to accept his offer at UVic and pursue academics over hockey was one of the most important decisions he’s ever had to make. “After this day, I changed not only as a person but also a student.”

It was a few short years after Austin began his studies at UVic that he learned of Odgers Berndtson’s CEOx1Day program. “I randomly came across it through a web search for scholarships,” he says. “I ended up finding the web page and reading more into some of the past winners’ experiences — which all sounded incredible.”

The program appealed to Austin mainly because of the opportunity to interact with a CEO one-on-one, as it presented him with the chance to learn more about the career choices that he or she made to get them there.

Austin’s take on the selection process:

Application: “The first stage involved filling out a standard application that comprised of your grades, resume, and a short essay on leadership. Doing an application at this stage was more or less like looking at a mountain and taking the first step. I knew there would be some exceptional students applying for the same opportunity.”

Online Leadership Assessment: “Applicants were asked to complete an online test that, generally speaking, graded them on their leadership capabilities.You couldn’t really control the outcome and had no indication of how you were doing. After an in-person interview, you can generally feel how it went; however, after a computer assessment, you have no idea. During this portion, Odgers Berndtson consultants evaluated us on these key pillars: a confident and ambitious individual who handles stress effectively, is politically astute, dependable, and values learning and developing new skills.”

Phone Interview: “Questions ranged from our background all the way to what CEO [we wanted to shadow] and why. During this process, I expressed my interest in wanting to meet Randy and the Ballard team because of his interesting track record of success. Applicants were mainly evaluated during this process for their ability to articulate themselves over the phone and show passion for the opportunity.”

In-person Group Interviews: “During this day I was able to benefit from not only the interviews but also from meeting the other candidates. We were able to interact and present a case analysis to McKinsey, which added another layer of complexity to the recruitment process. We were evaluated through speed round interviews, our behavioral assessment tests, and through a case presentation. We were also able to network with some of the Odgers Berndtson consultants and partners. During this process, candidates were evaluated on how they think on their feet, work in group situations, and their potential fit with prospective CEOs.”

“The in-person interviews were definitely the most challenging because of the incredible talent of the other candidates,” Austin says, while he notes that presenting to McKinsey employees in the case analysis and speed interviews was also quite nerve-wracking. “Although they were challenging, they were also extremely fun,” he says. “These assessments allow you to learn a lot about yourself and meet incredible people.”

On the morning of the event, Austin says his mind was racing with questions and he could hardly wait for his day to start. “I actually got to the building about 45 minutes early,” he admits. “I had to wait in another company’s parking lot until it was respectable to come inside!”

Austin says he was incredibly lucky to shadow Ballard on this particular day because it was also the day of their earnings report, a prospective investor visit, company meetings, and the day of some major structural changes. He had the opportunity to sit in the boardroom during the earnings report, shadow the deal presentation, sit in on all of the company-wide meetings, and ultimately, experience an organization like never before.

Austin says that this experience gave him a completely different perspective of the strategy and position of a publically traded company. “It allowed me to see a unique perspective of a company’s earnings report and inside the supply chain, production, and logistics of a successful Canadian company,” he explains. “Being able to see [inside] such a dynamic, long-lasting, and innovative company was a genuinely exceptional experience, and I look forward to taking the skills I developed during this day into my future career.”

After Austin’s CEOx1Day experience, he spent the summer at bcIMC, a Canadian Pension Fund, working in Equity Research. This role involved looking into the fundamental analysis of securities and sectors and evaluating management’s strategy, financials, and positioning. While it differed greatly from his day at Ballard Power Systems, he says his experience as CEO for a day gave him an unexpected edge.

“Interestingly enough, I was able to take some of the information I learned within the CEOx1Day program and use it within my work. Being able to see how a company works firsthand allowed for me to take a more concrete look into companies I analyzed, as I was able to always think of what a company required to be successful.”

Austin is currently studying abroad at the National University of Singapore for an exchange semester, which is something that he’s wanted to do since first-year. “I believe that doing interesting things like studying abroad, learning new languages, and getting out of your comfort zone really shape you as the person you are,” he says. “More than anything, I believe that studying abroad was a continuation of what I strived to do throughout the CEOx1Day program, which was learning new things and taking chances.”

Austin says the standout moment of his CEOx1Day experience was seeing Ballard’s CEO Randy turn to an employee and ask a question about his personal life, and in turn seeing a genuine smile spread across the employee’s face. “It reminded me of when I read an article on emotional intelligence, and how strong leaders will have a higher EI capability,” Austin says. “Through this moment I was able to see the importance of being a true leader, and although others may not have noticed, I saw what it meant to be a CEO.”

Key skills you’ll develop in the CEOx1Day program, according to Austin:

1. Communication: Not only will you learn how to communicate with senior management, you’ll also be able to observe how executives interact with investors and business partners.
2. Strategy: The night before Austin spent the day at Ballard, its management and board had cut some of its key players and was in the process of making some major strategic moves. “This experience allowed me to see a company going through change, and learn how to effectively implement it while keeping your culture intact,” says Austin.
3. The importance of feedback: One of the things Austin got to partake in while at Ballard was sitting in on company-wide presentations to all of their employees, which included an award presentation and updates on the company’s goals and future. “Seeing this truly made me respect the amount of work that goes into keeping a culture intact and keeping employees motivated.” Austin learned that setting goals and providing feedback makes employees more accountable for their actions, success, and failures — a piece of wisdom he won’t soon forget.

“You won’t get a more exciting, interesting, and eye-opening experience anywhere else, and I am truly thankful to the Odgers Berndtson team for allowing me to take part in this incredible program,” Austin says.