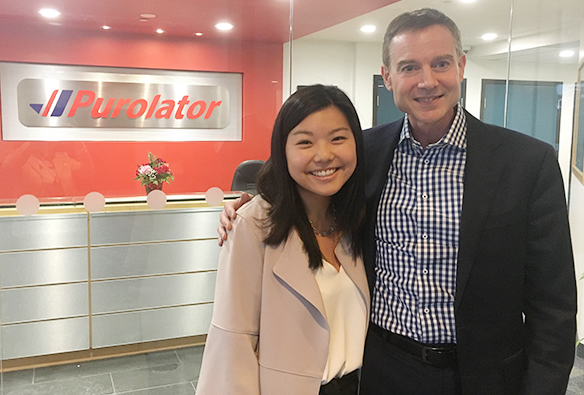 When Vanessa Lin (Com’19) was selected to take part in the CEOx1Day program, she knew she was in for a unique experience.

What she didn’t know was how much access she would be given to Purolator President and Chief Executive Officer John Ferguson.

As a result of the in-person connection, Ms. Lin gained valuable insight into what it takes to lead a Canadian company with more than 10,000 employees.

When she heard about the program, Ms. Lin knew she had to apply.

“I was drawn to it because it is such a unique opportunity,” she says. “When else would you get the chance to learn from someone with such a high-level scope? It’s a once-in-a-lifetime opportunity to see that kind of role firsthand.”

After applying online Ms. Lin underwent a rigorous, multi-stage assessment and interview process. In the end she was one of 18 post-secondary students from across Canada selected for the job-shadowing program.

Ms. Lin arrived at Purolator on Friday, Feb. 23 and started her day with a tour of the massive shipping facility in Mississauga. Throughout the day she met with a number of executives, including Mr. Ferguson, learning about the company and their roles.

What impressed Ms. Lin the most was the opportunity to observe Mr. Ferguson’s leadership style through a series of meetings, including a straight-talk session with employees.

“He takes a very collaborative approach,” Ms. Lin says. “Even though he leads, he also really values everyone else’s contributions. You can tell he really embodies diversity characteristics and understands that a team is better when there is diversity and everyone works together. Seeing that and then seeing how transparent he is with people in all positions throughout the company – that consistent approach really resonated with me. That is the kind of leader I want to be as well.”

In her third year of studies at Smith School of Business, Ms. Lin is busy outside the classroom through extra-curricular activities and also volunteers in the Kingston community with Girls Inc. and the Algonquin and Lakeshore District School Board. This fall semester she completed a study exchange at the University of Economics, Prague.

Looking to her own career path there is no definite end goal, she says, but she is clear on her approach.

“I will be working hard and doing something I love,” she says. “It’s about making an impact wherever that turns out to be.”

Originally published in the Queen's Gazette