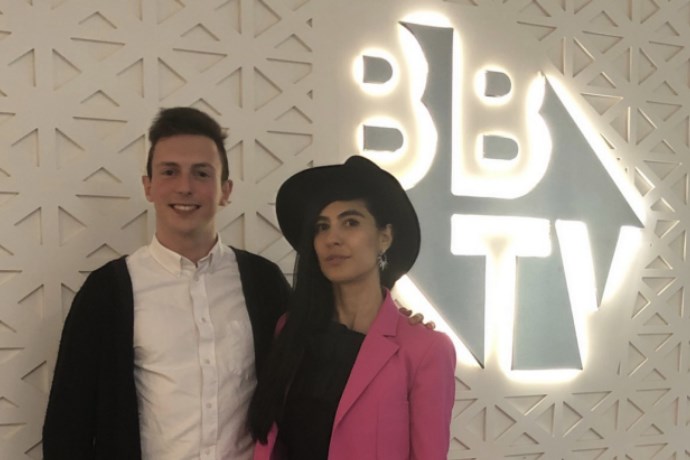 Back in October, I received this email from my university’s undergraduate society and thought “why not.”

Through running my university’s entrepreneurship club, I had the chance to meet a number of CEOs and entrepreneurs, but was still yet to meet a CEO of a truly large scale company and was curious how their story, role, and experience differed. While researching the CEOx1Day program, I saw that BroadbandTV was one of the companies for Vancouver and dug a little deeper. What I found about the founder and CEO, Shahrzad Rafati, amazed me.

Knowing that spending a day with Shahrzad would be an incredible learning opportunity, I applied, and thankfully made it through the CEOx1Day interview process and had the amazing opportunity to spend last Friday at BroadbandTV! I spent the day shadowing Shahrzad and other leaders at BBTV to learn about what it takes to run a billion dollar media-tech company while staying true to their quadruple bottom line of employee culture, financial, social, and environmental success.

For those who don't know - BroadbandTV is "a digital entertainment company that exists to empower creators and inspire audiences. Headquartered in Vancouver, the company is the world’s third largest video property after Google and Facebook in terms of unique viewers."

I was also lucky enough to be at BBTV on BBTV Day: a celebration of their 14th birthday. This gave me an interesting glimpse into how the office dynamics change when the headphones come off and the donuts, trivia, and beer come out. However, it wasn't all fun and games; I had entered BBTV that day armed with a long list of questions mainly involving three themes:

As I spent the morning being passed around by different leaders within BBTV, question one started to answer itself. Everyone I met was extremely kind, bright, and, most importantly, driven by the BBTV's quadruple bottom line. Hearing different people talk about BBTV's values, I could tell that it wasn't advertising disguised as social corporate responsibility, but a mission that everyone genuinely believed in and was rallied behind.

After seeing firsthand how this mission permeated throughout the company, I met Shahrzad and truly understood where the energy and commitment everyone had for BBTV came from. Sitting in meetings with her and other team members, it was clear that she was extremely personable and cared deeply about her employees. This was especially apparent when she ran off midway through a meeting to thank the office manager carrying a plateful of donuts for arranging the day's festivities and when she was floating around during trivia chatting and smiling with everyone.

After the BBTV Day festivities (and somehow knowing 0 out of 40 questions on the BBTV themed trivia), I got the chance to sit down with Shahrzad and ask her the remainder of my questions. We discussed the challenges she faced scaling a company as a young female immigrant with still imperfect English. How the company pivoted repeatedly alongside the evolution of the still infant YouTube and how she learned to not fall in love with ideas. How a strong culture is key to the success of a company. How the longest standing employee started as an intern as employee #3. How the best companies to start are those that solve big problems and have limitless opportunity.

One thing that really resonated with me was when I asked what others thought when she pursued entrepreneurship. Her response was that many people, including her parents, were not in favour of it and that it took many years to get BBTV off the ground and start the exponential growth that it has seen recently. Prying deeper into the early years, she gave me the following advice:

"Take big risks when you're young, because when you get older it becomes really really hard."

As someone taking the unusual first career step out of a Finance degree of working as a Software Engineer in a tech startup in Colombia, I was very relieved to hear this. I think it is important for all soon-to-be-grads to not be too worried about finding the most secure and safe job and to instead focus on what you really want to do and want to be doing in the future.

Shahrzad is an incredible businesswoman, leader, and human being and I am beyond impressed with the commitment and drive of the BBTV team. The company is a textbook example of how strong company values and culture can have an effect on the overall success and efficiency of a company.

As someone interested in pursuing entrepreneurship, getting in the minds of successful business leaders was an incredible opportunity that I am so grateful to have had the chance to be a part of. I cannot recommend this program enough to anyone interested in leadership or entrepreneurship as it is truly one of a kind. Thank you again to Odgers Berndtson, BBTV and all of the amazing individuals that I have met throughout this experience!

This article was originally published on LinkedIn by Alex Cyphus.