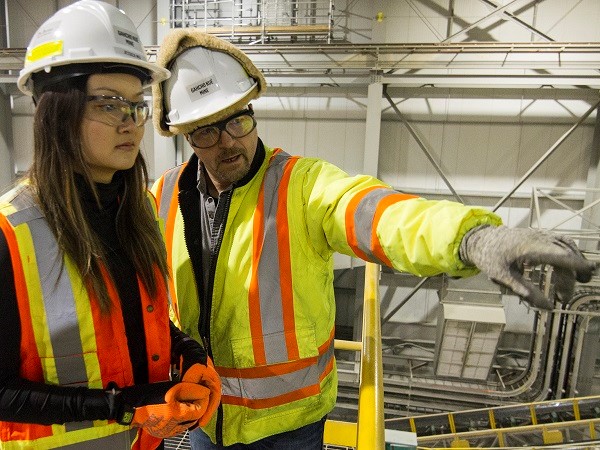 Fall has officially arrived, and along with the colourful gourds, ghouls, and our favourite spiced drinks is another eggs-citing autumn staple: applications for Odgers Berndtson’s CEOx1Day Program are officially open!

If you think you’ve got what it takes, why not start your career at the top? Odgers Berndtson and TalentEgg are looking to partner 19 ambitious students and future leaders with some of Canada’s top executives for the 2017 edition of CEOx1Day. Apply today and gain valuable on-site experience and mentorship that will take your career to new heights!

For 2016 finalist Jessica Wu, her CEOx1Day meant first starting low, really low, as in underground, at the Gahcho Kué Mine – an active diamond mine site in Canada’s Northwest Territories – before spending a day at De Beers’ Calgary headquarters with CEO Kim Truter.

We caught up with Jessica to get the lowdown on what the application process was like and what other candidates can expect should they choose to apply for the chance to spend the day with one of Canada’s leading CEOs!

A fourth-year Mechanical Engineering student at the University of Alberta, Jessica first learned about this opportunity from a friend on Facebook and quickly realized this could be an experience unlike any other.

“Where else can a student have a one-on-one day with the CEO of a major international corporation? I really think both parties benefit!” she said.

For Jessica, the learning and professional skills development began before even stepping foot on the site (mine or HQ!), it began during the selection process.

Having made it to the semi-finals, she described the face-to-face interview with Odgers Berndtson partners as rigorous, but rewarding. Unlike past experiences, this wasn’t just between an interviewer and an interviewee – other candidates were present too!

One question would be posed to the group, and each student would have one minute to answer. Jessica realized if she wanted to impress the partners, she’d have to think quickly and on her feet to communicate her ideas to them.

Additional insight into her leadership traits came in the form of the Hogan Assessment, a tool used to measure a candidate’s strengths, weaknesses and unique leadership traits. Candidates completed the assessment, which is around 200 questions, and the results revealed their unique professional profile, measuring strengths, weaknesses, working styles, and more. “The results indicated that I’m highly extroverted,” she said. “Being aware of my communication style, I’ve learned to slow down a bit and talk to people in a way that makes them more comfortable.”

While navigating the recruitment process was exciting in its own way, Jessica’s real adventure began in February when she was flown to the newly opened Gahcho Kué Mine, a fly-in/fly-out location 280 NE of Yellowknife in the remote sub-Arctic. The air was a frigid -30C, but the experience left Jessica feeling on fire with excitement.

“I can’t tell you how excited I was,” she said. “Coming from an Engineering background, these are things you study in textbooks or have heard of, but it’s not a place every Engineer gets to go to.”

Jessica learned that an effective CEO must wear many hats (and at times, helmets!), and her tour of the the mine and facilities made her realize the scope of responsibility a CEO faces. Most of her experiences had been from books, but touring the facility and speaking with employees made the lessons tangible and real.

After hanging up her hard hat and flying back home, Jessica’s next destination was the Calgary De Beers Headquarters, where she would meet Kim Truter, the CEO of De Beers Canada.

Jessica had never met a CEO before, let alone spent a whole day with one, but the idea of mentorship from such an established industry leader allowed her to channel this nervous energy into excitement. She lept into action, participating in a general meeting between VPs and General Managers and paying attention to both what was being said, and how.

“What surprised me was it was more of a discussion, rather than a standard reporting to a boss,” she explained about the collaborative environment. “Everyone was so involved, giving feedback and suggestions, rather than the ‘command-and-do’ dynamic I was expecting.”

The meeting demonstrated to Jessica that to truly thrive professionally, you need to surround yourself with others that believe in you and your ideas. You should seek out an environment that recognizes your strengths and abilities as an individual and helps you develop as a professional.

Her one-on-one time with Kim proved to be just as valuable. Together, they discussed Kim’s own career journey and the personal philosophies that drive his professional success. Jessica was especially impressed, and a little surprised, by his advice on the importance of always growing, personally and professionally.

“Whenever you are at a job and you feel like you are too comfortable and aren’t growing anymore, that means it’s time to go,” he told her. “This goes for CEOs, too.”

She found it eye-opening and encouraging that even CEOs, who have built and achieved so much, would sacrifice it all for the opportunity to continually be seeking new experiences and personal growth.

For both Jessica and Kim, this attitude of always pushing yourself to seek out new opportunities applies to all aspects of life, including the CEOx1Day competition.

“It was such a great experience just to go through the recruitment process,” she said thoughtfully. “You learn so much about yourself, you meet new people. You don’t have to be a Nobel Prize winner – all they’re looking for is a good fit between your passions and those of the CEO.”