Millennials become CEO for a day

The Globe and Mail follows up with finalist Nabaa Alam and CEO Dave Mowat 1 year after their CEOx1Day experience. 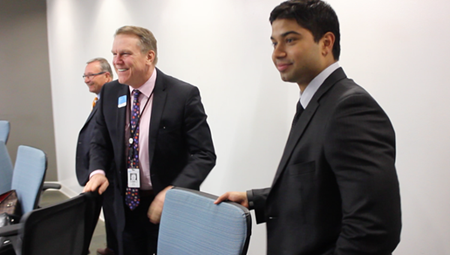 As Nabaa Alam neared the end of his chemical engineering program at the University of Alberta, he was still unsure what path he would take following graduation.

“In previous generations, people stayed with the same company, or they kind of had a career mind-map of what they wanted to do,” said the 23-year old, who graduated last April. “When I came out of engineering, I worked a lot in the oil and gas industry, but I didn’t really know what I wanted to do.”

Everything changed for Mr. Alam in February 2016, when he earned the chance to shadow one of Canada’s most powerful chief executives, Dave Mowat, who leads Alberta-based financial institution and Crown corporation ATB Financial.

“Dave told me not to really focus on that career mind-map, and instead follow my passions,” Mr. Alam said, adding that Mr. Mowat advised him that, “as long as you love what you do, you’re going to succeed in the end.”

With that advice, Mr. Alam decided to organize a small campus team to answer a request from the Alberta Government calling on students to help develop sustainable energy resources in the province.

“We came up with the idea of taking canola oil and making marketable fuels such as diesel, jet fuel, and gasoline,” said Mr. Alam, adding that Alberta’s government liked the idea enough to dedicate $10-million collected from the carbon levy to design a renewable energy biofuels pilot plant. If successful, the province plans to build a larger facility in 2018 that can process 200 million liters of canola oil annually, which could save 112,000 tons of carbon-dioxide emissions by the year 2020.

“Dave really inspired me to take on that project, because I saw it as an opportunity to really help Alberta and Canada and the world through renewable-energy development,” Mr. Alam said.

The job-shadowing experience that paired the two was part of an annual program by executive recruitment firm Odgers Berndtson. Now in its fourth year in Canada, the CEO-for-a-day program matches students with executives to help bridge the gap between millennials and business leaders.

“Every generation has an almost built-in resentment or criticism of the generation that follows,” said Eric Beaudan, the global head of Odgers Berndtson’s leadership practice, adding that this reflex can be counterproductive and even be damaging to employer-employee relationships. “One of the statistics we better get used to is that by 2020 the global workforce will be 50 per cent made up by millennials.”