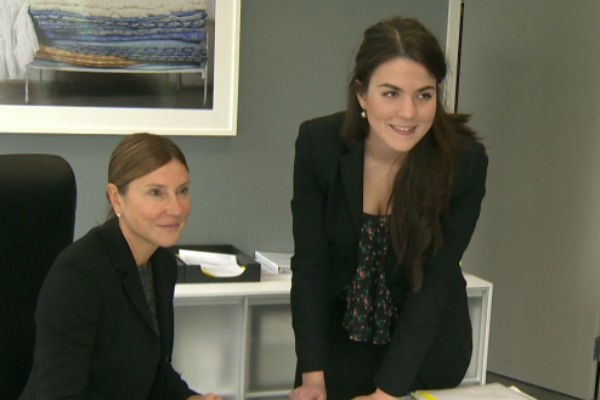 The finance major, who grew up in Chomedey and Sainte Dorothée, was one of ten students selected from among some 5,000 applicants for a special program designed to give tomorrow’s prospective business leaders insight into what top corporate leaders do.

“No one knows what a chief executive officer really does, especially a student,” Fragos told The Suburban the following day. “They appear to be mythological, untouchable figures whom you never get to meet—let alone for an entire day.”

“The experience far exceeded my expectations,” she enthused. “I followed [Brouillette] through back-to-back business meetings where I got to see her in action. It was cool to learn by seeing how she reacted and provided people with constructive feedback.”

“One of the main takeaways for the students is to see with their own eyes what is the real job of a ceo, because they don’t know what a ceo does on a daily basis,” said Roger Duguay, managing partner at Odgers Berendtson, the executive search firm that organized the event. “The other is to make the connection between what they learned in school and the real world.”

Berendtson has run its CEO-for-a-day program for about seven years in Europe and elsewhere, but this year’s Canadian stint was a North American first. “We match 3rd- and 4th-year undergraduates with the CEO of a major firm, whom they get to spend the day with,” Duguay said.

Fragos was one ten students who was selected from more than 5,000 applicants from across Canada. “What sets them apart is their strong leadership skills,” Duguay explained. “They’re all strongly involved in student and community work, have very strong interpersonal communication skills, willing to learn and develop and take their studies very seriously. Some of them have already won awards and have done international work.” “They’re young, ambitious, involved—and nice,” he added. “We’re not looking for big egos.”

“Learning what drives [Brouillette] will shape the way that I act,” confirmed Fragos. “She always tries to help the people in every organization that she has worked for to move forward. It truly resonated that tangibles like money, status or power were not her main driver. It was very nice to gain her perspective.”

Next on Fragos’ agenda is the Canadian commerce society confab that she is helping to organize. “Some 400 undergraduate business students from 28 universities across Canada will fly into Montreal for the four-day conference, which will start Feb. 27,” she said.

From Duguay’s perspective, the inaugural North American CEO-for-a-day program proved worthwhile. “It entailed a lot of volunteer work,” he acknowledged, “interviewing 5,000 people across Canada.” Duguay’s firm is better known for recruiting CEOs than placing students with them. Odgers Berndtson is currently helping VIA Rail Canada find a new CEO, and the firm has placed the last three governors of the Bank of Canada. “All of our consultants wanted to help foster a link with the young leaders of the next generation,” Duguay concluded. “We rarely have a chance to get younger leaders involved.”