Job shadowing with CEOs grows exponentially, as university students learn to be leaders 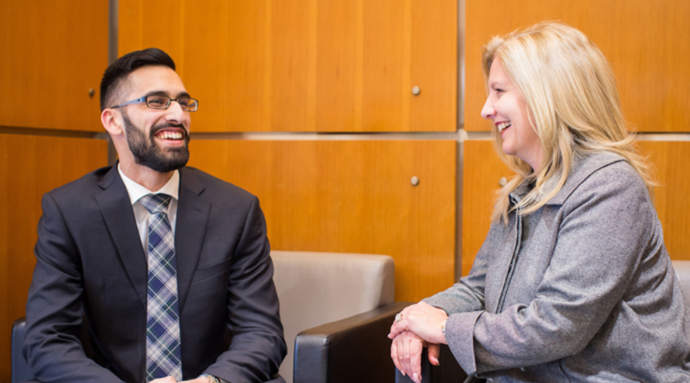 Job shadowing is a common practice for many enterprises as a means to expose students or new recruits to the daily workings of a particular profession. But it’s not common to see high-powered CEOs take a student under their wing for a day.

Every year, up to 18 Canadian CEOs take part in a unique student job-shadow program, developed by executive search firm Odgers Berndtson, called CEO x 1 Day. This year, the program matched third- and fourth-year university students with top CEOs from organizations that included Kellogg’s, PayPal Canada, Cossette, Vancity, Alberta Innovates and Amnesty International. CEO x 1 Day is a global initiative that originated in Spain and now runs in 12 countries. Canada was the second country to adopt it.

This year, Canada’s program reached a significant milestone: for the first time, more than half of this cohort’s CEOs are women, says Jane Griffith, partner and national diversity leader at Odgers Berndtson in Toronto. “This shows the program is resonating with both female and male leaders.”

The program benefits both students and leaders, she stresses. “Students learn first-hand what it really is to be a leader. Many come back and say they didn’t expect CEOs to be so humble, respectful and empathetic, rather than just scary bosses. What I hear from CEOs is that they love connecting with next generation leaders to get a sense of what they think and what drives them.”

Getting CEOs on board has been surprisingly easy, she adds. “It’s not much of a sell. In fact, we get a lot of requests from CEOs to be part of this. The trick is getting their time.” Demand from applicants is also strong. Over the five years the program has run in Canada, 2,000 students have applied for 88 matches.

Now that they have reached gender parity, the plan is to duplicate that moving forward, Griffith says. “That’s where we as a firm want to get to. We want people to see leaders based on their ability and skills and not gender, ethnicity or sexual orientation. As part of that, we want to normalize female leadership and show students that it’s not abnormal or exceptional to have a female leader.”

Tamara Vrooman, president and CEO of Vancouver City Savings Credit Union (Vancity) in Vancouver, spent her job-shadowing day with Gurjodh Mahal, a fourth-year business student from Simon Fraser University. She says she was pleasantly surprised to have a male student on board for the day. “The program was very thoughtful in terms of matching CEOs and students in a way that was mutually beneficial. Leaders are good at talking about we should do, but what we actually do is sometimes different. This is less about what young people should do, than it is about talking through what leadership actually looks like and provide better value.”

Having had the advantages of a strong mentorship network throughout her own career, Vrooman says that as a female CEO it’s important to take advantage of these opportunities to showcase women’s leadership to both men and women. “It’s important both as a role model for women (students), who see themselves as leaders one day, but it’s also important for men since they will be working for women leaders.”

With three older sisters pursuing their own careers, Mahal says he was grateful for the opportunity to work with a female leader. “I know my sisters are always facing difficulties and have a real understanding that it can be difficult for women to progress in a workspace,” he said. “Those barriers might not always be apparent to someone coming in. With Tamara, it was nice to see a different perspective. Not only did I learn more about the industry, I learned about her successes and goals and a lot of what she valued.”

One thing from the experience that will stay with her was a comment Mahal made during his visit. “He said he was really surprised by how real a CEO can be; and that how we deal with things is not so foreign from the way anybody else does. Hopefully job shadowing brings the perspective that, as CEOs, our roles are filled by people with strengths, weaknesses and a sense of humour just like anyone else. We all have something to offer and learn.”