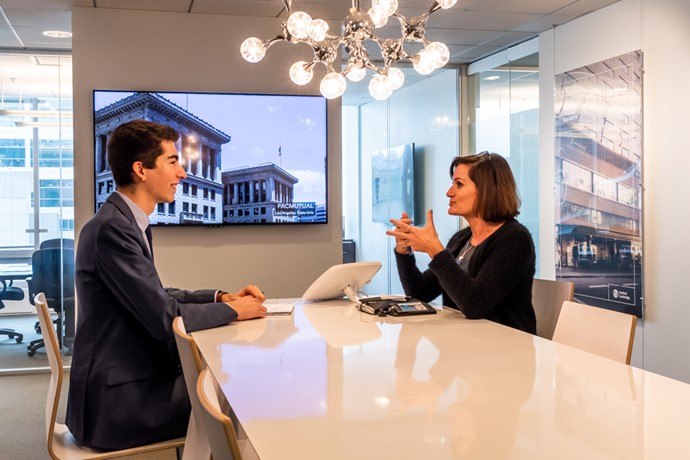 In a day filled with meetings upon meetings, it can be easy to lose perspective.

Calling it a “regenerating experience,” she says that it has challenged her to think more about how she could better cater to the needs of young employees.

“I like thinking that, okay, I could be a better manager integrating this new generation in the company if I really listen to them and really consider the fact that they could be different,” she says.

It also drove home to her the fact that even as a 51-year-old executive with more than 25 years of experience in finance and real estate, the learning process never stops.

“Even if you think that you have done things and seen a lot of people … you can always learn from people wherever they come from, whatever they’ve experienced,” she says.

Right from the start of the day, when Mr. Dasté sat in on Ivanhoé Cambridge’s investment committee meeting to discuss the future of the company and new ways of doing business, Ms. Palladitcheff was impressed with his level of confidence and ease in an unfamiliar situation.

“I asked him to introduce himself and he did that in front of the 13 senior people, so it was fun to see him very mature and I was thinking about myself 30 years ago and I doubt I would have been able to do the same,” she says.

As a student studying information technology at HEC Montréal, Mr. Daste is pursuing a career in that field. He spent an hour or so of the day with the head of IT at Ivanhoé Cambridge, Jean-Francois Perras.

Ms. Palladitcheff says that Mr. Dasté has a wide range of talents, but that the key for him is to find out what he does best and optimize those qualities.

“Try to be very good at something, instead of being average at everything,” she advises.

Throughout the day, she says that Mr. Dasté saw that running a company is not just a question of being an expert in something or dealing with numbers or systems, but it’s also about how you treat individuals who work there.

“He realized through the different meetings that we had and the way we interacted with the people, that even behind IT there are human people, and if you don’t consider that properly, then IT is not going to [function well,]” she says.

One of the biggest traits that Mr. Dasté observed in the president of Ivanhoé Cambridge was her ability to give 100 per cent of her attention and focus to every person she met.

“That’s something I’m going to have to work on, because when you’re meeting somebody, you’ve got to really give all your energy to this person to focus and to be productive, so that was probably her biggest skill set,” he said.

The 22-year-old student, who is in his last semester of his bachelor of business administration in IT, adds that another thing he noticed was how Ivanhoé Cambridge seemed to have a friendly work environment. That was something he wasn’t expecting, and he credits Ms. Palladitcheff for having a vision of how she wants her company to be and she shares that with people who work there.

“When the leader has vision and is able to share this vision with their employees, it’s impressive how that environment can become very nice to work in,” he says.

Most inspiring of all, though, to Mr. Dasté was how Ms. Palladitcheff managed to work her way to the top of a company that holds more than $65-billion in assets around the globe. He says that she didn’t start out with the aim of being president, but her work has spoken for itself.

“So that’s really inspiring, just working with passion and people will notice and will probably give you a job or a promotion later on. She’s very inspiring for me,” he says.

This article was originally published in The Globe & Mail.