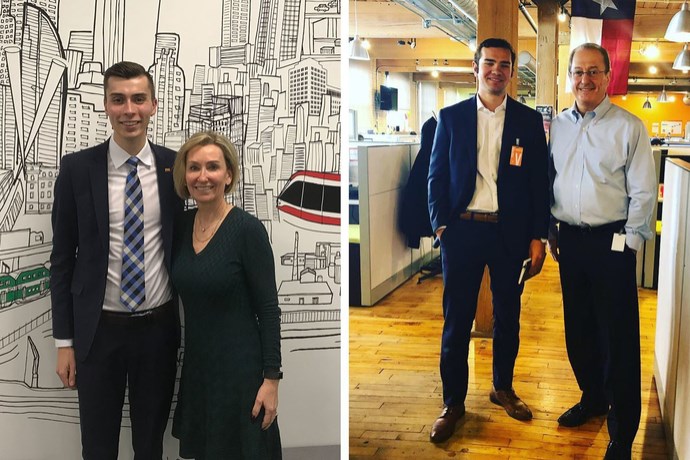 For McNaughton, the experience hit close to home, since De Silva once walked in his shoes as an Ivey student herself.

A day in the life

McNaughton spent the day at De Silva’s side, from sitting in on executive meetings to attending a speaker panel with journalists. The day was a whirlwind experience, giving him insights into the decisions a CEO makes and how to lead an organization.

From 2011-2015, De Silva served as the Dean of Ivey Asia, and offered pieces of advice from her international business experience. It was clear to McNaughton that trust was crucial to De Silva’s success.

“Jan is someone who trusts the people around her and puts a lot of resources into building their capabilities,” he said. “She listens to her team, and she acts on their ideas. She is incredibly intelligent.”

Over at Softchoice, Alizadeh’s day with De Palma was equally action packed. Their day included day-to-day meetings, as well as more in depth discussions about sales numbers, customer experience, and employee compensation.

“Spending one-on-one time with Vince was the most surreal part of the day. I was star struck,” Alizadeh said. “Vince had already let me shadow him for an entire day. But beyond that, he gave me one-on-one time where I could ask him anything I wanted. It was over an hour. I can’t even imagine what that’s actually worth in terms of both tangible money and intangible benefit to me.”

To top it off, every month Softchoice airs Orange Nation Live – a live hybrid of CNN and Saturday Night Live, Alizadeh explained. He was featured on the broadcast to 1,800 employees, giving his thoughts on the day with De Palma.

“It was such a fun and exciting thing to be a part of. I could tell it’s good for employee morale,” he said. “Ivey promotes fantastic communication skills, so I was very comfortable on stage. We present so much here at Ivey, it felt like just another day.”

McNaughton’s day with De Silva showed him the human side of leadership.

“The biggest takeaway I had was that people impact other people,” he said. “When I used to think of large scale decisions and changes, I pictured a giant board of faceless people and secret meetings. I now realize these decision makers are people. They have kids and families. They take the TTC to work. For me, it made my goals a lot more realistic. It’s normal, everyday people who are making change.”

Alizadeh credited De Palma with teaching him a great lesson. No matter how complicated a problem is, chances are you can boil it down to a simple solution: Focusing on the people.

The experience was extremely valuable for both McNaughton and Alizadeh. They knew spending a day with a top CEO would be beneficial, but they also found value in the rigorous application process and the CEOx1 Day network.

“The CEOx1 Day experience was really cool. And now, I’m part of a really great network of incredible people,” McNaughton said. “You don’t just get that one-day experience with a CEO – you get a network that you can lean on and learn from forever.”

“This was a once in a lifetime experience,” Alizadeh said. “I’ve learned so much. All of the CEOs in this program care a lot, or else they wouldn’t be there. I couldn’t recommend it enough.”

This article was originally published on the Ivey Business School Website.