CEO for a day program provides lessons learned for a lifetime 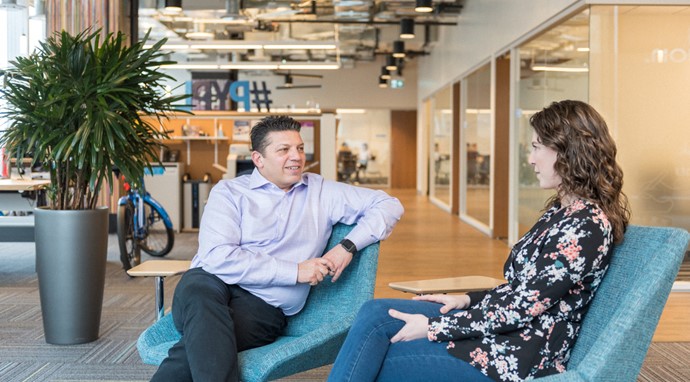 You can immediately pick up their commonalities, even on a phone call.

Paul Parisi, president of PayPal Canada, isn't a slow burner. His answers are quick and not the pat responses of an executive drone. At one point, he can barely stop himself from prematurely revealing a new company strategy that he's excited about.

Fourth-year Brock University business student Olivia Poulin is of the same ilk. Her insights into the CEOx1Day (that is, CEO for a day) program, in which she shadowed Mr. Parisi one recent workday, are also quick and unfailingly clear.

As they described their day together, one inevitably filled with C-suite meetings, they both suggested the obvious draw of being in a position of power in business (or at least shadowing alongside). But being a CEOx1Day isn't for everyone, nor should it be. Not everyone will be interested in talking about how to strategize before meetings with head-office reps. But that particular exercise gave Ms. Poulin one of the day's biggest lessons.

It was a meeting held at PayPal Canada in Toronto with reps from the company's U.S. main office. They had flown in to discuss a new service being introduced for PayPal users (that initiative that Mr. Parisi could barely stop himself from revealing).

Usually, in a meeting such as this, Mr. Parisi would give an overview of PayPal's Canadian operations to the reps. PayPal Canada has around six and a half million consumers and merchants using the service nationwide.

But at this meeting, he had his department heads say how their divisions could handle the initiative. It helped give them a sense of ownership in the strategy, he said. It also helped steer the conversation to practical matters. It changed the whole dynamic of the meeting.

Mr. Parisi had taken Ms. Poulin aside beforehand to explain how he wanted the meeting to go.

"The lesson there was, just because you're the leader, it doesn't mean you need to take the stage. You can pass that off to other people, and it's highly valued when you do that," Mr. Parisi said.

It's not an entirely original motto, but it's one that a leader can easily forget in the flurry of daily chores.

Mr. Parisi, who has been president at PayPal Canada for 18 months, after many years in management positions at American Express, wanted to avoid having "six people coming in from global [head office] and just speaking at us. So my job as the leader in this scenario is, 'How do I get the group engaged pretty quickly?'" he said. "Olivia was, like, 'I see exactly why you did that.'"

In a way, this is the grunt work of a chief executive. It's about having to continually redirect one's attention whenever a decision is needed or a line of business needs immediate action.

"I would imagine it would really take a toll on you after many, many days and many years, being so involved," Ms. Poulin said, even though she said she liked that kind of energy and a CEO's need to know the minutiae of the business.

"I could imagine it could be taxing, but also incredibly rewarding."

The CEOx1Day program, which is organized by executive recruiting firm Odgers Berndtson and takes place in various cities around the world, brings together young business hopefuls and executives at the top of the food chain.

Ms. Poulin was among seven undergraduate students from the Toronto region chosen through a lengthy vetting process, including interviews and taking the Hogan Assessment test, which seeks to measure such leadership traits as adaptability, ambition and sociability.

At Brock University in St. Catharines, Ont., Ms. Poulin is concentrating in marketing, while also operating for the past three years her own pet-sitting business, Pupadise, with a staff of six and 300 clients around the Niagara Region.

In its promo material, much is said of how CEOx1Day helps to bridge the generational divide between young business hopefuls and executives at the top that stresses a company's larger purpose, rather than employees merely satisfying their specific work functions.

"Today, when people come into the office, they want to know that they are creating a difference," Mr. Parisi said. "As a leader, you can't just create that vision for the most senior people in an organization. You have to create it throughout the organization, right down to the most junior people. … There has to be a higher purpose than just, 'I have a job at this place, and I know where to go, and I know what to do.'"

The reason is a newer kind of focus on the customer, not on corporate modus operandi. "If you're in any business, and you're not pivoting quickly, and you're not agile, you cannot be successful," Mr. Parisi said.

It's all about a certain, new take on what it means to be adaptable, both Mr. Parisi and Ms. Poulin indicate, the expectation that hard skills and a solid knowledge base has to be accompanied by soft skills, such as intuitively changing up a meeting (a taking a certain risk) to get different people speaking and feeling more personally invested.

"Regardless of the industry you're in, it's almost impossible to stay in your silo," Ms. Poulin noted.

Originally published in The Globe and Mail