From CEOx1Day Finalist to Co-Founder of a Startup 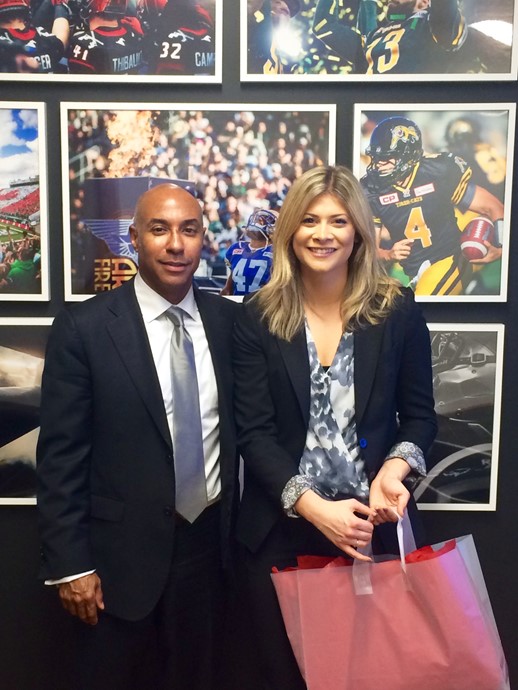 When Alyssa Spagnolo first heard that she would be shadowing the Canadian Football League’s Commissioner Jeffrey L. Orridge through the CEOx1Day program, she was very excited and a little confused.

“As a female who has hardly ever watched football, I was curious about the reasons for the pairing,” she said. She later discovered it was due to remarkable similarities in their leadership style and goals. After the announcement, she immediately dove into research and resolved to find out everything she could about football and the Commissioner before she met him.

This tendency to be well-prepared didn’t surface right before she was about to meet a CEO. She made sure to meticulously deliver exactly why she’d be a good fit for the program and how passionate she is about leadership throughout the selection process.

What was it then, that pushed her to become a successful CEOx1Day candidate?

A hunger to learn, she told us.

“Any opportunity that is something you don’t come across every day is something I move towards,” said Alyssa. “I also love meeting different people—I’m very people-driven.”

As a commerce student at Queen’s University, Alyssa studied leadership but craved to see it in action beyond the pages of a textbook. She wanted to experience what being a leader was like in a real-world context and found that the CEOx1Day program provided exactly that.

Having led many groups during her time at Queens, she wasn’t exactly new to leadership either. Still, she was curious to see how leaders operated on a larger organizational scale —like the CFL.

She brainstormed over 50 questions to ask Commissioner Orridge. “The questions spanned his leadership style, most important career decisions, the habits and qualities that contributed to his success and more,” said Alyssa. “I was over-prepared and had thought of every possible question but was glad that I did.”

Her day with Commissioner Orridge began in the office, moved onto executive board meetings, included a three-hour lunch and culminated in an interview with the Globe and Mail. During her time with the CEO, Alyssa made sure to be tactical about her inquiries, creating candid ones on-the-spot if her planned questions didn’t fit the conversation.

While she asked Commissioner Orridge many questions, the most impactful lessons she learned that day were not from asking questions but by observing him in action. She found it astounding to see how swiftly he made high impact decisions while engaging his whole team.

“I saw how quickly all the pieces are moving, how to utilize the people on your team and make judgements on the fly,” she said. “I also learned how charisma and influence can impact a team to be engaged and feel involved in those quick decisions.”

His ability to connect with those around him continued beyond the workplace as well.

“He truly acted with utmost integrity, kindness, and respect – from his top level executives, to the cab drivers and restaurant servers,” said Alyssa. “Exceptional leadership never turns off – you truly need to be “on” at all times.”

The most important adage he imparted to Alyssa also had to do with people.

“The Commissioner had several pieces of advice—one that stuck with me, is to surround yourself with people that are smarter than you and to make sure they know it and are continuously made aware of it,” said Alyssa.

Since then, she’s taken his advice word-for-word.

“I was on the cusp to decide what I was going to do after graduation during CEOx1Day,” said Alyssa. “Initially, I had a few job offers, but I’ve always had the drive to be an entrepreneur although I felt I wasn’t really ready.”

With an evolved vision of what it means to be a leader from her CEOx1Day experience, Alyssa grew confident in her ability to become an entrepreneur.

“It was one of the pivotal moments of refining my path towards entrepreneurship,” she said.

Right after CEOx1Day, she co-founded Mindset.

“I don’t know how it all came together. I feel really lucky – it felt like fate to me, right time, right place, right people,” she said.

Mindset aims to make headphones that allow wearers to focus better by reading their brain waves. For example, if there’s a lapse in your concentration, Mindset’s headphones detects this and steers you back to work via auditory cues.

Post-graduation, Alyssa and the Mindset team were accepted into Next Canada, an early stage incubator that helps young entrepreneurs connect with investors, develop their skills and find mentors in their sector. Then they joined Hax, the world’s largest hardware accelerator in Shenzhen, China.

“We’re building our product in China for the time being and planning to launch in early 2017,” said Alyssa. “We’re planning to start selling as early as next year.”

As she continues on her path of entrepreneurship, Alyssa sees her CEOx1Day experience as a vital part of her journey.

“Did it impact my application to the Next 36? Yeah! It shows that you have leadership potential and you have the drive to lead a company,” she said. “While it’s very different from being a small-scale entrepreneur, you have the same drive to get things done.”