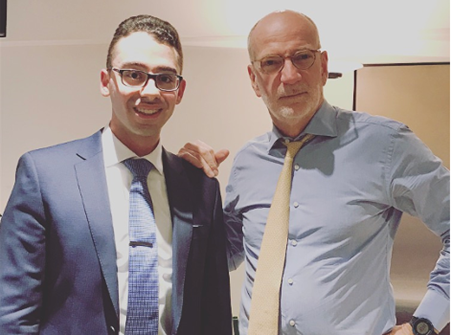 Inspiring. This is how Buruç Asrin, a student in Software Engineering at Concordia University, described his day after participating in the CEOx1Day program. He’s one of two students who had the opportunity to shadow our president and CEO, Hubert T. Lacroix, for a day.

N: What surprised you the most during your day with the CBC/Radio-Canada?

B: I got to see first-hand the CBC’s evolutionary progress for the digital era come-to-life, driven by the 5-year strategic vision of CEO Hubert T. Lacroix and his team. I was surprised by not only the depth but also the breadth of the changes occurring, and the manner in which the departments are moving as one cohesive unit to tackle such challenges in a short period of time.

N: In your opinion, what are the necessary qualities in order to become a CEO?

N: You had the opportunity to spend some time with Maxime St-Pierre,  Director of Digital Services at Radio-Canada. What did you learn?

B: My discussion with Maxime was very interesting as we delved into the fact that the modernization process that CBC/Radio-Canada is in puts the company essentially at the intersection of technology and the liberal arts. Beyond the antennas or the fiber-optic cables, software is at the heart of the exciting changes happening throughout the company today. Thus, the balance between content and technology is crucial when determining whether to build something in-house or delegating entirely to a third-party.

N: What did you learn that you’ll carry with you as you start your career?

B: It became clear to me that one’s academic background should not always dictate what type of opportunities we should seek out for ourselves and that the learning process should never halt regardless of tenure.