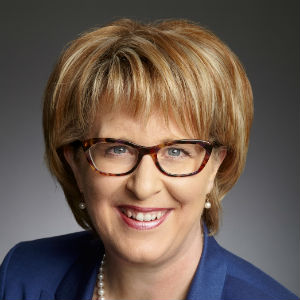 Nathalie Tremblay, a Fellow of the Ordre des comptables professionnels agréés du Québec, has been a member of the Board of Directors and President and Chief Executive Officer of the SAAQ since May 3, 2010.

In 1987, after completing a licence in accounting and a bachelor’s degree in business administration at Université Laval, Ms. Tremblay began her career as a chartered accountant with Samson Bélair/Deloitte & Touche, where she served as a team leader. She entered the public service in 1989, when she joined the office of the Auditor General of Québec. In 1995, Ms. Tremblay took on her first mandate at the SAAQ, where she assumed leadership of the accounting department for three years before becoming Director of Internal Auditing and Investigations. She then left the SAAQ for the Ministère des Finances, where she served as the first female Controller of Finance from 1999 to 2004.

Prior to her appointment as President and Chief Executive Officer of the SAAQ, Ms. Tremblay held the office of Vice-President and General Manager of the Fonds d’assurance automobile du Québec from 2005 to 2010.