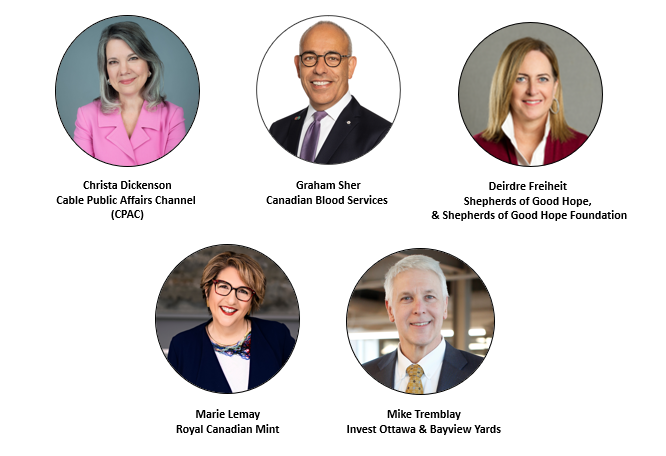 Christa Dickenson is an executive leader with a proven track-record engaging and collaborating across private, not-for-profit and public sectors. Now leading the Cable Public Affairs Channel (CPAC) as president and CEO, she has three decades of experience spanning film, cable television, interactive digital media, technology, telecommunications, and the public sector. Her strong sense of mission has been to the benefit of Telefilm Canada, Interactive Ontario, Rogers and CTV News. An accomplished tri-sector leader, Ms. Dickenson possesses an unparalleled talent for meaningful change management coupled with a strong business acumen. In addition to a professional background spanning both the creative and business sides of the screen-based industries, Ms. Dickenson has a BAH and a Master of Fine Arts in Film Studies. In 2022, she was nominated for the APEX 2022 Leadership Excellence Award in public service by colleagues and superiors in recognition of her contribution and dedication to serving Canadians.

Graham Sher is the Chief Executive Officer of Canadian Blood Services, the agency charged with managing Canada's national blood, plasma, stem cell, and organs and tissues programs in all provinces and territories across Canada, excluding Quebec. He has been with Canadian Blood Services since it began operations in September 1998, when he joined as its first Vice President Medical, Scientific & Clinical Management. He was appointed to the position of Chief Executive Officer in June 2001. In this capacity, Graham continues to lead Canadian Blood Services through an extensive, multiyear Transformation journey which has seen the organization diversify its product and service offerings, drive innovation and knowledge creation, and pursue a relentless strategy focused on business excellence and value creation. Graham is a recognized expert in transfusion medicine and science, is widely published in this field and regularly sought after as a speaker nationally and internationally.

He sits on a number of blood system and health care related advisory bodies, and has provided consulting support to other countries in the transformation of their blood systems. Graham is a founding member and the current Chair of the Alliance of Blood Operators. He was the first international director on the Board of the AABB, and served as its president in 2013-14. He served on the Canadian Partnership Against Cancer (CPAC) board from 2012-22, serving as Chair from 2016-22. He sits on the C.D Howe Institute’s Health Policy Council.

Beyond blood system governance, Graham has a passion for health system design, management and governance, health system transformation, and is active in several areas of health system performance improvement. He also has achieved Director’s Certification from the Institute of Corporate Directors.

In September 2015, Graham was named as one of the 20 most powerful physicians and medical leaders in Canada. He received the AABB President’s award in 2018. In December 2021, he was appointed as an Officer of the Order of Canada.

He is happily married and has three wonderful sons. Graham is constantly struggling to find more time for his other passion in life: photography. In 2013 Graham led a successful climb up Mt. Kilimanjaro, in a fundraising effort that raised over $600,000 toward Canada’s umbilical cord stem cell bank.

Michael Tremblay joined Invest Ottawa & Bayview Yards as President and Chief Executive Officer in March of 2017. Prior to joining Invest Ottawa, he was the Vice President of Public Sector for Microsoft Canada from April 2007. In 2020, Mike was appointed to the Board of Directors for both organizations.

He has an MBA from Concordia University in Montreal and is a graduate of Computer Technology from Algonquin College. Michael completed the Directors Education Program and is ICD.D certified with the Institute of Corporate Directors where he is a member of the Ottawa Chapter Executive. Mike has served as a director with the Institute on Governance (2017-2020) and the Canadian Council for Aboriginal business (2005-2007). From 2004-2017, Michael served as a member of Algonquin College’s Board of Governors and served as Chair of the College’s Foundation Board.

Marie Lemay was appointed President and CEO of the Royal Canadian Mint in January 2019. With 20 years of service in senior government leadership positions, she has an extensive background in public policy. Prior to her appointment, Ms. Lemay served as Deputy Minister and Deputy Receiver General for Canada at Public Services and Procurement Canada, managing 12,000 employees and a $6 billion budget.

From January 2008 to 2012, Ms. Lemay was the CEO of the National Capital Commission, where she led a change in culture to one of openness and transparency, including the introduction of public Board meetings.

Deirdre Freiheit has been President & CEO of Shepherds of Good Hope and Shepherds of Good Hope Foundation since 2014. SGH is a dynamic, innovative organization that cares for the needs of adults experiencing homelessness who live with mental health challenges, substance use disorders and trauma. SGH welcomes everyone without judgement and offers shelter and supportive housing services to all genders.

SGH operates the largest shelter in Ottawa and the only one serving all genders around the clock. Shelter services are unique in that they include 24/7 diversion services in partnership with Ottawa Police Service, Ottawa Paramedic Service and OC Transpo. Healthcare and harm reduction services are offered 24/7 on site in the shelter and in our supportive housing programs, in partnership with Ottawa Inner City Health. SGH also operates 5 supportive housing residences across the City of Ottawa, with two more currently under construction.

Deirdre and her team have positioned the organization to be a part of the solution to ending chronic homelessness by offering a diverse portfolio of shelter services and supportive housing options for individuals who face barriers to obtaining housing. SGH continues to expand its supportive housing portfolio from east to west across the city of Ottawa, with the goal of providing permanent housing to more individuals than are currently experiencing homelessness in our shelter. Our organization is on track to achieve this goal by 2023.

Deirdre is also CEO of SGH’s Foundation whose purpose is to achieve annual multi-million dollar revenue targets to support programs and services offered by Shepherds of Good Hope.

Deirdre has been a leader in the not-for-profit sector for 30 years. She is a former Board Director of Ottawa Inner City Health and is currently Chair of the Board of Directors of the Alliance to End Homelessness Ottawa. She was also a member of Health Canada’s Expert Committee on Substance Use in 2021.

Formerly, she was a member of the Institute Advisory Board for Nutrition, Metabolism and Diabetes of the Canadian Institutes of Health Research and a lay reviewer on the Heart & Stroke Foundation of Canada’s research grant review panel. Deirdre is a passionate advocate for marginalized populations. She is a graduate of Atlantic Business College in New Brunswick, where she was raised. She and her husband reside in Ottawa and have two grown children.