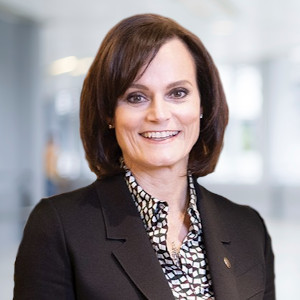 Judy G. Goldring is a renowned leader in the asset management industry and one of Canada’s most influential business women. As President and Head of Global Distribution at AGF Management Limited, she oversees the execution of strategic plans in support of business priorities, counsels the CEO on business planning and provides direction for corporate initiatives.

Judy is also a member of the Executive Management Team where she assists in the development and execution of AGF’s strategy. In addition, as a member of the Board of Directors for AGF Management Limited and AGF Mutual Funds, she provides strategic leadership and vision that promotes AGF’s long-term growth.

Since joining AGF in 1998, Judy has held several roles with increasing responsibility. Prior to being named President, she served as Executive Vice-President and Chief Operating Officer. In this role, she demonstrated leadership in promoting and supporting the firm’s operational effectiveness.

Before joining AGF, Judy specialized in regulatory and administrative law. She received a Bachelor of Arts in Economics from the University of Toronto and earned her Bachelor of Laws (LL.B) from Queen’s University. She is a member of the Law Society of Upper Canada and has been a member of the Canadian Bar Association since 1993. In 2019, she received an Honorary Doctorate of Laws (LL.D) from the University of Toronto.

Judy is Vice-Chair of The Investment Funds Institute of Canada (IFIC)'s Board of Directors and sits on the Board of the Toronto French School (TFS), Canada’s International School, which is the largest bilingual school in Canada. In addition, Judy serves on the Scholarship Advisory Committee for the Children’s Aid Society, as well as is a lead fundraiser for the JDRF $100m Campaign to Accelerate.