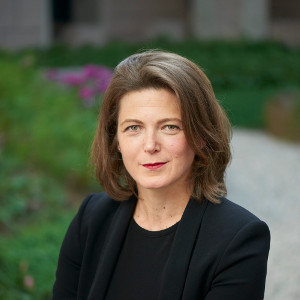 Sasha Suda is the Director and CEO of the National Gallery of Canada.

The youngest person to assume this post in more than a century, Sasha was appointed in February 2019 and is passionate about revitalizing the Gallery’s relevance to audiences across Canada and beyond. Her ambitions for the Gallery reflect both the times in which we live and art’s importance to them: to bridge cultures, to engender diversity and perspective, and to unleash the power that civic institutions hold.

To this end, Sasha has demonstrated immediate leadership by establishing three core institutional values that will help the workforce move in a bold new direction: the Gallery is centered on art; it offers a warm and generous welcome; and it embraces the unfamiliar and the future.

Born in Toronto to Czech parents, Sasha studied at Princeton University before completing her Master’s degree in art history at Williams College and her PhD at New York University. Her professional career began at the Metropolitan Museum of Art in New York, where she worked in various roles in the Medieval Department between 2003 and 2011. Following this, Sasha returned to her native Toronto to work at the Art Gallery of Ontario, first as an assistant curator, and eventually as Curator of European Art and the Elliott Chair of Prints & Drawings. In these roles, she led major international exhibition projects and spearheaded innovative digital initiatives that presented historical art to audiences in a new light.

In addition to her work in major art institutions, Sasha sat on the Association of Art Museum Curators’ Committee for Career Advancement and represented Ontario at the Governor General’s Canadian Leadership Conference.

She lives in the Sandy Hill neighbourhood of Ottawa with her two children, Frances and Felix, her husband Albert, and their trusty dog Phil.