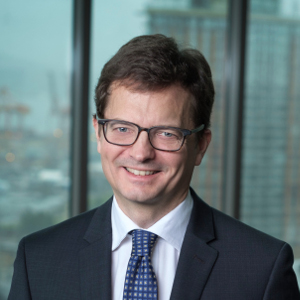 Chris O'Riley is BC Hydro’s President and CEO.

Chris leads B.C.'s largest Crown corporation, the fourth largest company in the province as ranked by annual revenue. With a clean energy advantage thanks to a long history of hydroelectric generation, BC Hydro delivers 98% renewable and clean electricity to its 4 million customers. To ensure a reliable supply of this critical product, BC Hydro will spend approximately $2 billion per year over the next 10 years to refurbish and expand its electricity assets. With construction of the Site C Project currently underway, Chris continues to seek opportunities to support clean development in B.C., such as through low carbon electrification.

Chris built his career at BC Hydro, starting as an engineer-in-training fresh out of university in 1990. During his 29-year career, Chris has held positions throughout the organization and across the province, including roles working with customers, leading operations, overseeing capital projects, and working at BC Hydro’s trading subsidiary. He has been a member of BC Hydro’s Executive Team since 2007, and was appointed Deputy Chief Executive Officer in 2015.

Originally from Nova Scotia, Chris' family relocated to B.C. in 1974. Why? His dad was inspired by the growth in B.C. and in particular, a Time Magazine article featuring W.A.C. Bennett, the driving force behind BC Hydro as we know it today. With great appreciation for the sense of history and legacy of our province's crown jewel, Chris feels honoured to be leading the company today.

Chris is a Professional Engineer and holds a Master's degree in Business Administration. Chris lives in Vancouver with his wife and three children, where he is active in his local community.